This is the movie that started it all for me. I was hooked on biker movies ever since. I'm not quite sure why, as this wasn't a very good movie, but my friends seemed to love it. They watched it over and over, they couldn't get enough. It's difficult to get past the notion of Tyne Daly as the hot chick on the commune, but I guess the hippies were taking some pretty strong herbs to make the mix up. Anyway... 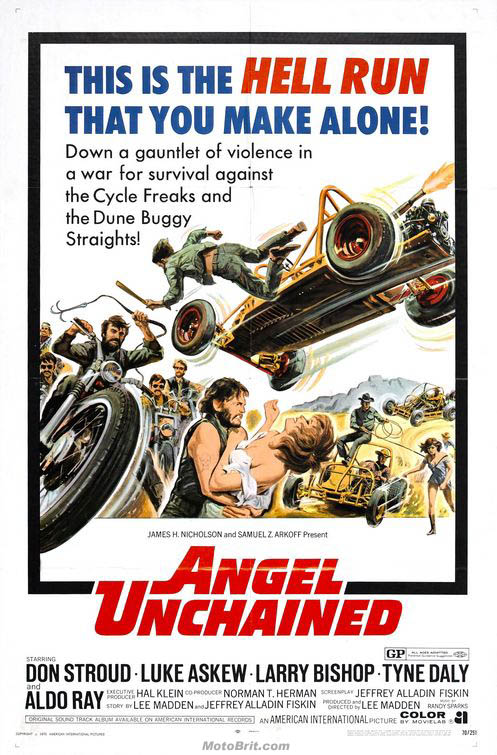 Angel makes the break from his club. He feels "strung out" and needs to ride alone (unchained). Of course, that would make for a pretty boring movie and he ends up being alone for about a minute and a half, until he meets some hippie commune freaks while filling up the Triumph. They're being hassled by the cowboy locals and when Angel tries to lend a hand, he gets the same treatment. Angel hooks up with the freaks and heads to their commune.

At the commune, Angel meets the hippie leader, Jonathan Tremaine who's doing the I Ching. Angel then falls for the hippie Merilee and grows to like the commune. They live happily ever after.... well they would have, except for those nasty cowboy locals who are hell bent on destroying the hippie commune. Angel tries to reason with the cowboys by sticking a pitchfork in one, and in a later apology, he zaps another with a cattle prod (good times).

Back at the commune all the hippies are mad at Angel for pissing off the cowboys. Tremaine tells Angel the he should bring in his old club to protect the commune from the cowboys and help straighten out the mess he's made.

Angel reluctantly goes out and finds his old club. First they give him the cold shoulder, then they mock him repeatedly about being a "farmer". As a favor, Pilot, the club leader, agrees to take a few guys and go with Angel to the commune in exchange for some beer. This works for a day or two until the club realizes the magical chocolate chip cookies some old injun on the commune makes are full of "whammo". The bikers end up doing as much damage as the cowboys trying to find the stash.

No sooner does this mess finish, the cowboys attack the commune in their dune buggies (don't ask me). The hippies put up a lame defense with the help of the bikers. Tremaine ends up buying it.

The moral of this story? I have no idea, but it is available on VHS and DVD.
It's worth a look.