Not too shabby. An entertaining movie with some attempts at light humor. The usual American International crew, plus Jocelyn Lane... mmmmm. I'm not sure I buy her as a biker babe, but she is a babe and her outfit with the boots is a 10+. If I've not made myself clear, Jocelyn Lane is HOT (or at least was). With that in mind, this movie rates our highest, five Iron Crosses. 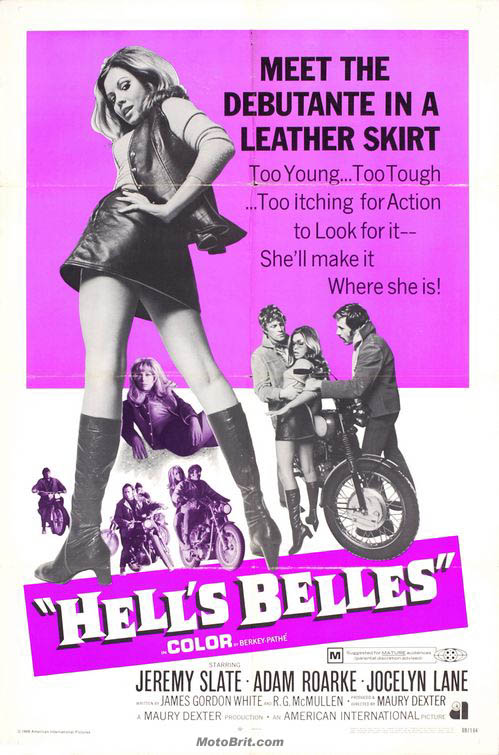 Dan the local desert racer and farmer wannabe wins the big race and the Grand Prize... a Rickman Triumph 500? (at least that's what I think it is. If anyone has a clearer copy and knows for sure, post below) Dan wants the bike, but knows that selling it can get him the cash he needs to by some farmland. Another person who wants the bike is Tony (Michael Walker, the brother of Robert Walker Jr. in case you didn't notice the resemblance), the rider who came in second. He makes Dan a feeble offer for it and Dan refuses.

Tony wants that bike bad and hatches a lame plan with the help of his friends to get it. At night Tony fakes a crash in front of Dan as he drives his pickem up truck with the shiny new bike in back. When Dan gets out to help, they jump him, knock him out and take the bike. When Dan comes to, it doesn't take long for him to figure it out and he goes after them.

As Tony and his friends grab a bite to eat during their getaway, they run into a biker gang whose leader, Tampa (the great Adam Roarke), also wants the bike. After Tony refuses the generous offer of nothing from Tampa, the boys fight and lose. The bikers take off with the new machine. Shortly after, Dan catches up with Tony who confesses, but tells Dan that the bike he stole was just stolen from him. Dan gets the info he needs and heads out after the bikers to get his bike back.

Dan finds the bikers and sneaks up at night to steal it back. He almost gets away, but is knocked down and caught. Tampa, who is a very reasonable man, explains to Dan that he's not going to get his bike back, but that he understands Dan's plight. He generously leaves Dan his ex-woman, Cathy (a deal I gladly would have taken). Dan refuses and gets the crap beat out of him.

Dan continues to haunt the bikers with Cathy in tow and the two eventually grow on each other. The final scene has Dan beating Tampa to get his bike back, but losing Cathy as she falls back with her old beau... so touching.

It's available on VHS and DVD.